There’s nothing more frustrating than watching your beautiful pumpkin plant produce gorgeous flowers but no plump orange gourds. Over and over, they flower with nothing to show for their work. 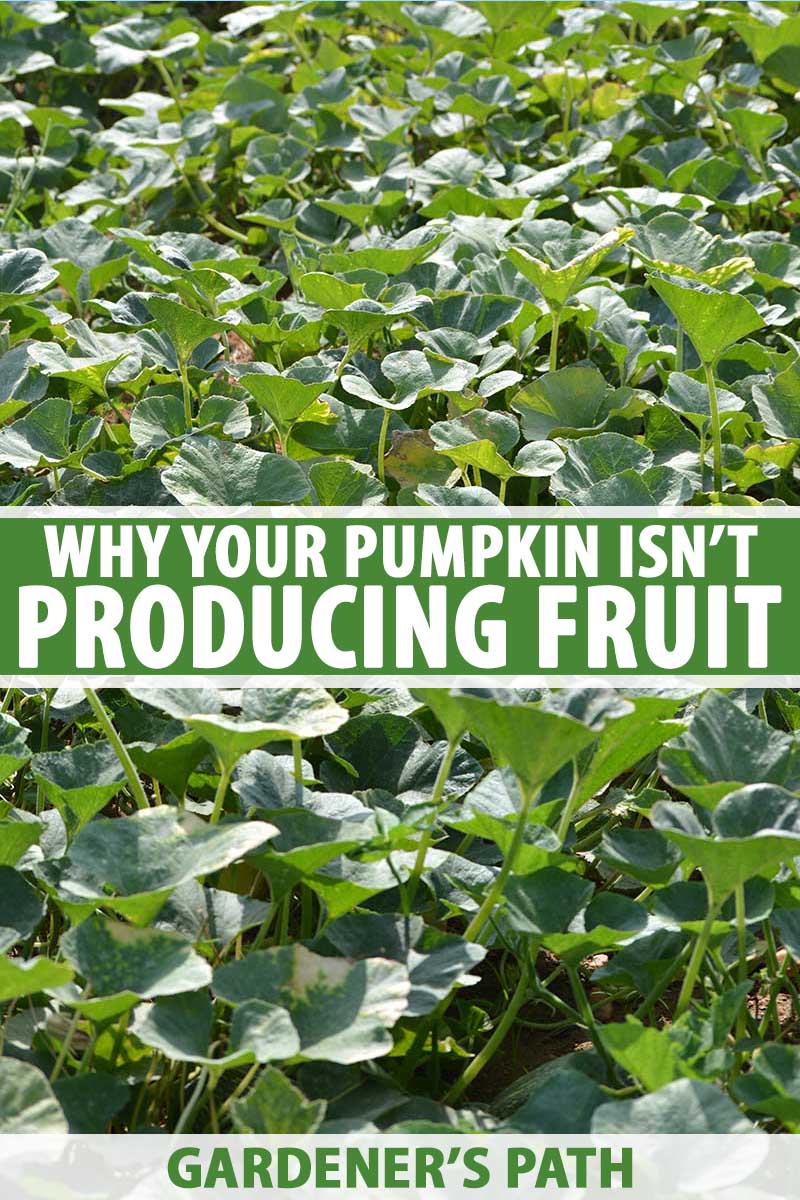 You want them to be ready in time for Halloween, or maybe for a fun dinner party where all your guests pick their own homegrown pumpkins to take home with them.

So what’s going on? How can you encourage your plants to produce fruit?

In this article, I’ll reveal the top 5 reasons why your pumpkin isn’t producing fruit — and how to fix them.

The most likely reason why your healthy vines aren’t producing fruit is that the female flowers aren’t being pollinated.

So let’s talk about the birds and the bees of the pumpkin world for a second.

The very first flowers you see on the vine will be male. 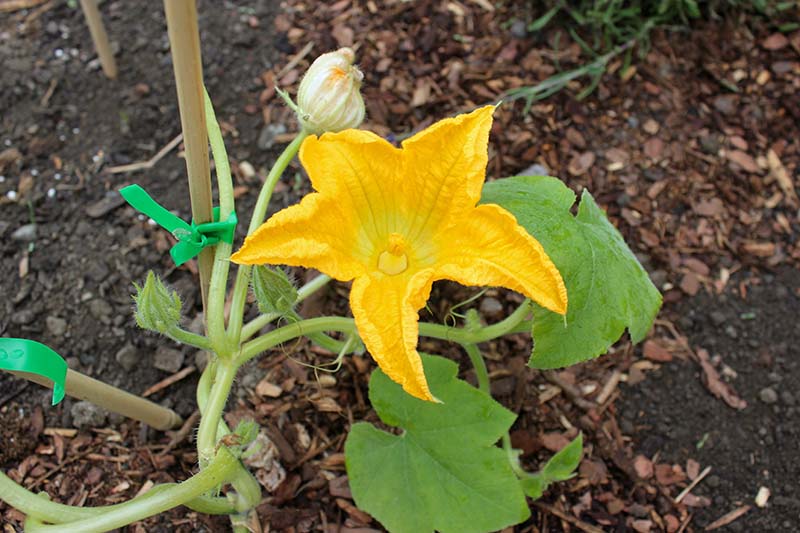 In this photo, one male flower is open, signaling to bees that there’s food here. The other male flower on the plant bloomed two days before the open one. Photo by Laura Melchor.

These lack an ovary, which female flowers have: a clearly visible bump or nodule behind the petals. 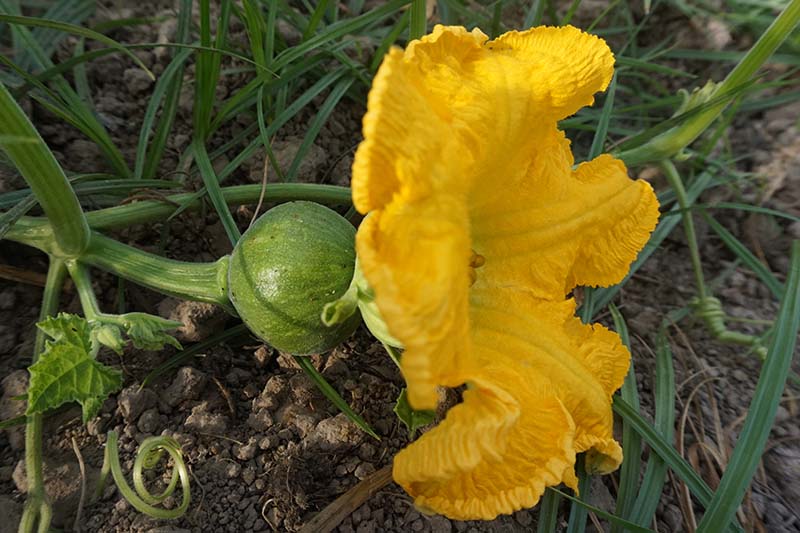 Male flowers, called staminate flowers, begin to bloom about 55 days into a pumpkin’s overall growing cycle, and they’ll be the only flowers you see for one to two weeks.

This is because the male flowers are there to basically yell out to the bees in the area that there’s pollen and nectar for the taking. 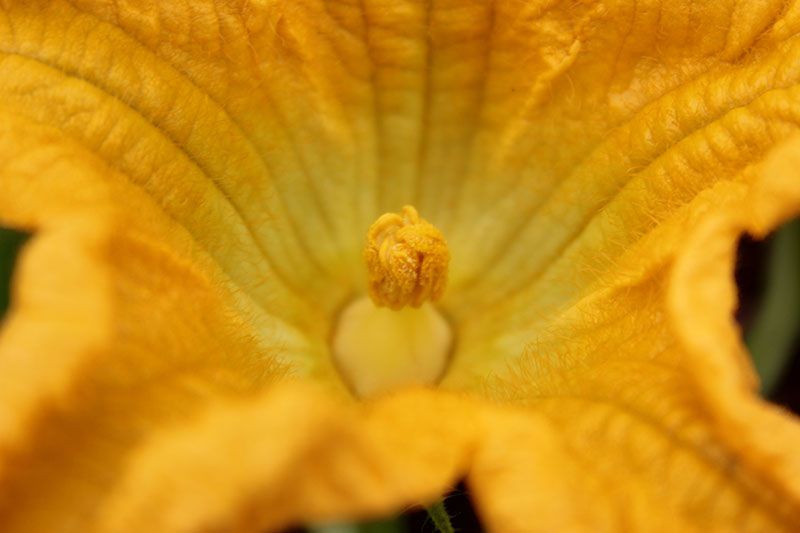 Here’s a male flower on my ‘Howden’ pumpkin plant. See the pollen on that stamen? Photo by Laura Melchor.

That way, when the female – or pistillate – flowers bloom, the bees will already know where to get their food.

Both male and female flowers open at dawn and close by the end of the day. The window for pollination is short!

If you notice that you only have male flowers, this might be the key to why you don’t yet see fruit: the female flowers may not be ready to open yet.

If, on the other hand, you see female and male flowers open at the same time but the ovaries never enlarge and instead shrivel up and drop off, you can probably blame a lack of pollination.

A shortage of bees in the area is a likely culprit. While other insects can pollinate pumpkin flowers, bees are typically the best pollinators, according to Alex Surcica of the Penn State Extension program.

If you don’t have many bees because locally-used pesticides are harming them, or parasites or poor nutrition have taken their toll, you can plant bee-friendly plants like lavender in your pumpkin patch to improve pollination rates next season. 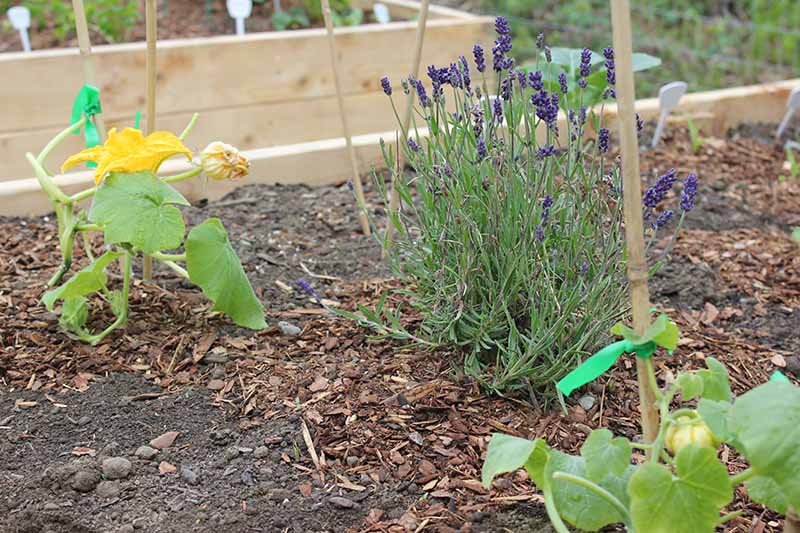 Keep in mind that introducing pollinator-friendly flowers may still be insufficient.

You may need to hand-pollinate your pumpkins by breaking off the open male flowers and brushing the pollen-filled stamens over every part of the female flowers’ segmented stigmas, one at a time. 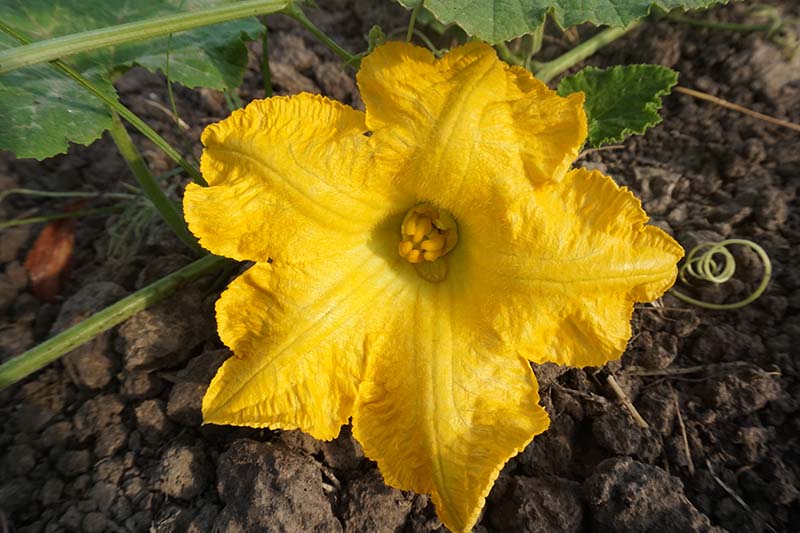 If a lack of pollination is what’s keeping your gourds from forming, hand-pollination should greatly increase your chances of seeing those ovaries turn into squash.

Pumpkins love the sun, but they don’t like sweltering heat.

I imagine a female pumpkin under heat stress to be like me, on the fourth of July in Oklahoma, at nine months pregnant.

For some reason I had decided to tromp around town with friends and watch a fireworks show in 92-degree weather with 60 percent humidity. I could barely breathe.

When flowers or baby gourds get too hot – with several days in a row of temperatures 90°F or above and nighttime temperatures of 70°F or above – the heat stress can cause them to drop flowers, or the developing fruits. 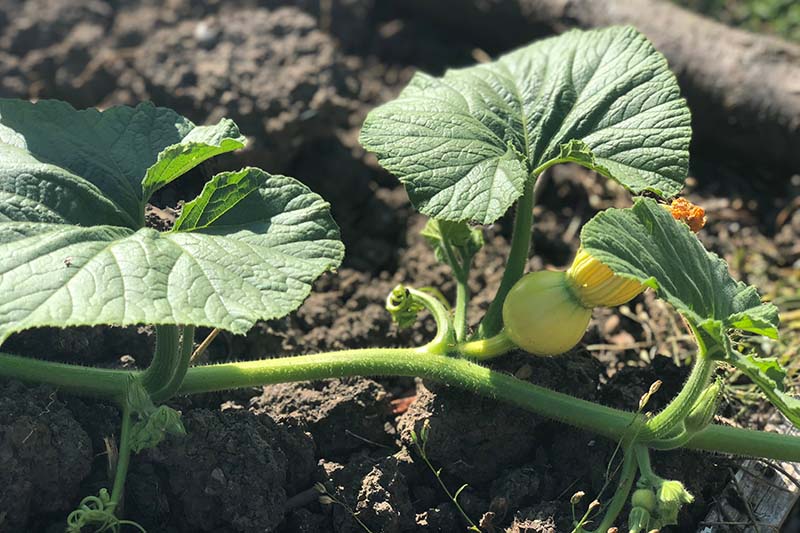 If they don’t actually fall off the plants, flowers may shrivel and cease to grow.

Under that type of stress, the plant simply doesn’t have enough energy to do the hard work of producing fruit.

In addition, high temperatures around the time of pollination can prevent the pollen from germinating and fertilizing the female flower.

So keep an eye on the weather in your area, and if stressful conditions are on the forecast, provide your plants with shade.

Old sheets tied over hoops work well, as do row covers or some other type of shade cloth from the gardening store.

Be sure to provide adequate irrigation during hot periods, as well, and lock the moisture in with a light-colored mulch that deflects sunlight.

Like other members of the Cucurbitaceae family, pumpkins need lots of water because they’re made up of a lot of water – around 90 percent.

But too much water, especially in the case of waterlogged roots, can cause issues with fruit production. It’s important that the soil is well-draining.

Too much water can cause roots to become stressed and stop producing flowers, especially female flowers. It can even cause young fruits to shrivel and die. 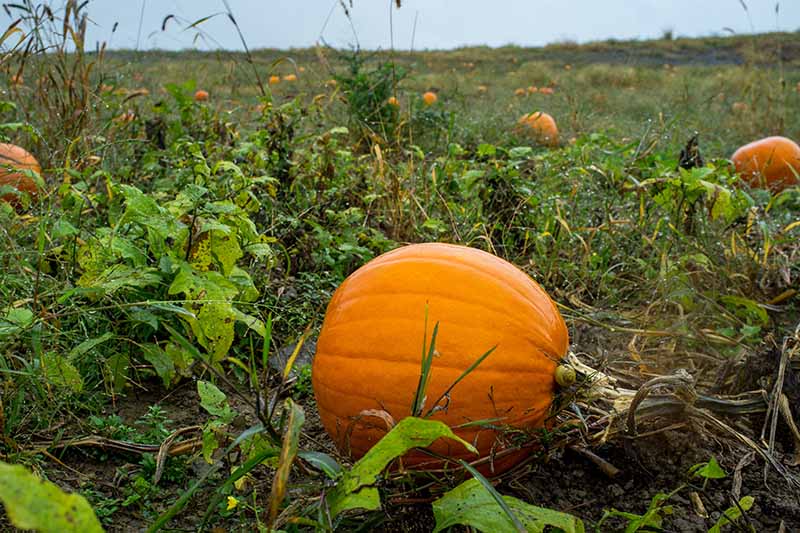 If it’s going to rain and rain and rain in your area, protect your pumpkins from excessive moisture by covering them with a plastic row cover, at least until the rain stops.

The plants need about an inch of water per week. To check the moisture level, stick your finger into the soil.

If it feels damp (even if soil looks dry on the surface), there’s no need to add water.

On the flip side of the too-much-moisture problem is the not-enough-moisture issue. 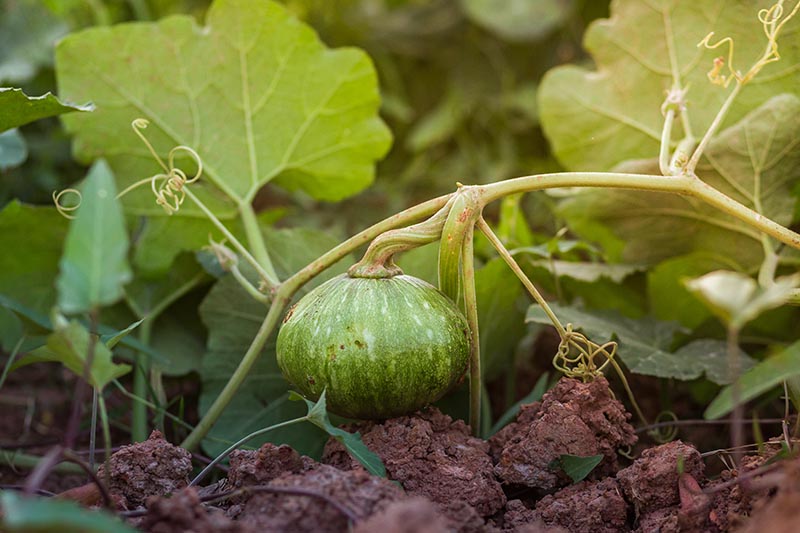 Drought conditions can cause a plant to produce many more male flowers than female flowers, which doesn’t necessarily eliminate the growth of fruit, but usually reduces it.

When a plant doesn’t have the nutrients and energy it needs to produce many female flowers, it won’t produce as much fruit.

If drought conditions abound in your area, make sure you give those pumpkins enough water.

Maybe your plant isn’t bearing fruit because you’ve got lots of vines and leaves but no flowers. In this case, the soil might contain too much nitrogen.

While your gourd plant definitely needs this nutrient, it doesn’t need excessive amounts — especially if there’s a shortage of available phosphorus, which directly contributes to flowering and fruiting. 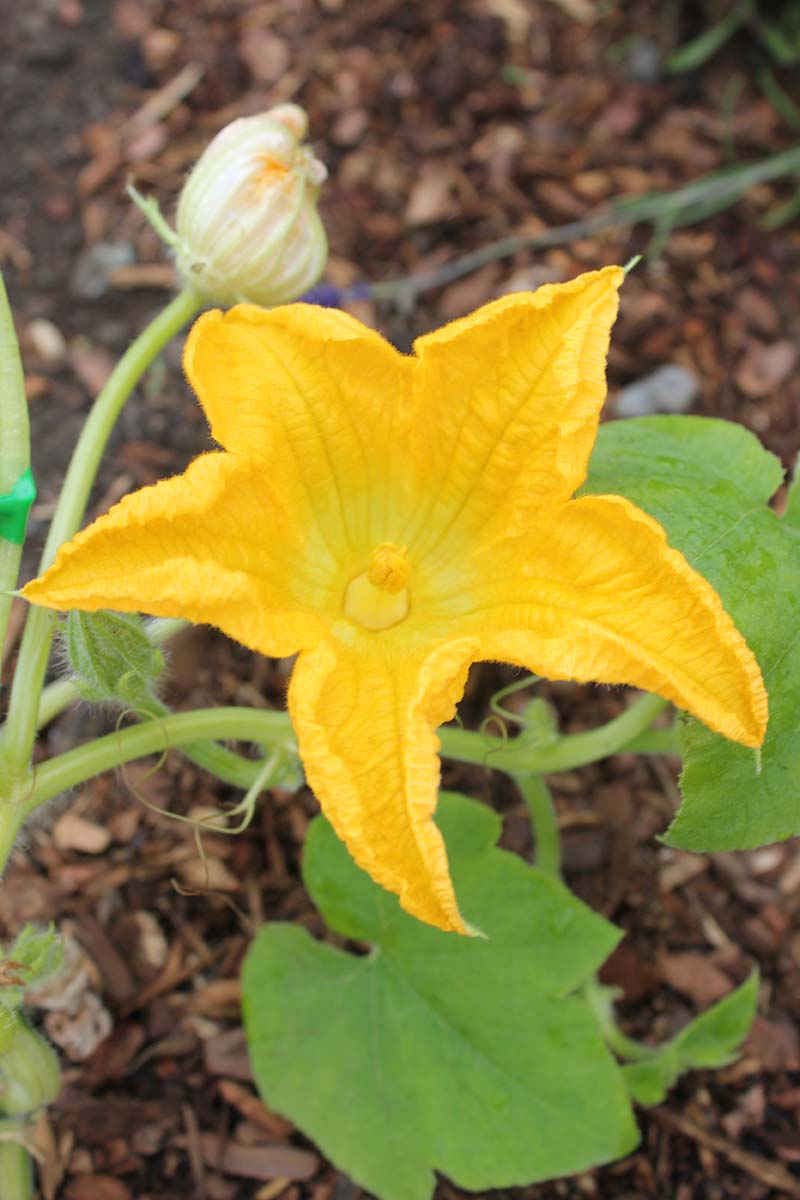 Switch from fertilizing with a balanced 10-10-10 NPK fertilizer and instead add a 5-10-10 product, or fish bone meal, which is high in phosphorus.

In a week or two, you should see flowers begin to form.

Orange Delight is On the Way

Now that you know the top five reasons a pumpkin isn’t producing fruit, plus how to fix them, you can look forward to an abundant harvest of orange beauties in a few months. 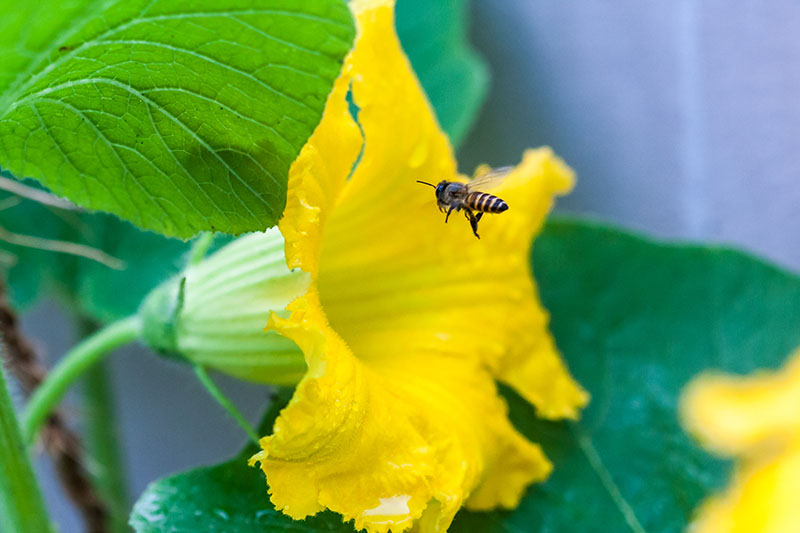 And you’ll feel all the more proud of your efforts if you’ve worked through a problem like lack of fruit and come out victorious.

Have you ever had to coax fruit from your plants? Let us know in the comments below!

And remember to check out these articles on growing pumpkins for more tips:

Laura Melchor grew up helping her mom in the garden in Montana, and as an adult she’s brought her cold-weather gardening skills with her to her home in Alaska. She’s especially proud of the flowerbeds she and her three-year-old son built with rocks dug up from their little Alaska homestead. As a freelance writer, she contributes to several websites and blogs across the web. Laura also writes novels and holds an MFA in writing from Vermont College of Fine Arts.

The right way to Raise Corms for Winter Storage

Easy Steps To Preserve Mosquitoes Away From Your Panorama

19 of the Greatest Delphinium Cultivars

The right way to Raise Corms for Winter Storage