Are parts of your plants covered with black splotches or a dark coating?

If so, it’s possible they are suffering from a condition called sooty mold. 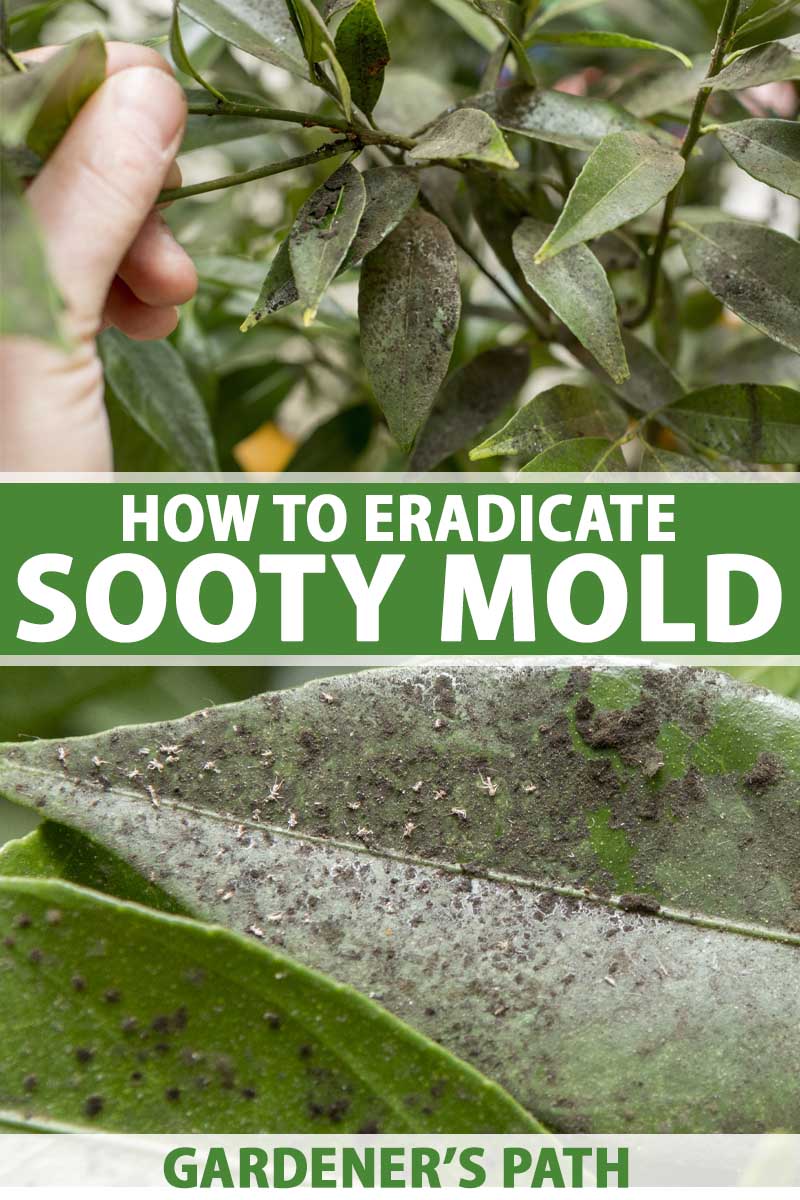 Sooty mold is the common name for several types of fungi that grow on the sweet secretions left behind by sap-sucking insects that feed on your plants.

While these fungi do not infect the plants, they can cause damage by covering such large areas that they block sunlight from the leaves.

This condition is usually an indication of an infestation from aphids, whiteflies, soft scale, leafhoppers, mealybugs, spotted lanternflies, and other insects with piercing mouthparts that feed on plant sap.

You can usually solve the problem by taking steps to control the insect infestation.

In this article, you’ll learn how to identify and treat an outbreak of sooty mold in your garden.

What Is Sooty Mold?

Sooty mold is a condition caused by the growth of several different kinds of fungi that feed on the honeydew secretions left behind by insects on plants and other surfaces.

As the fungi grow, they produce dark mycelial threads that look like soot. These can be small and blotchy or large, black masses that cover large areas of the foliage, stems, and in some cases, fruit and vegetable crops. 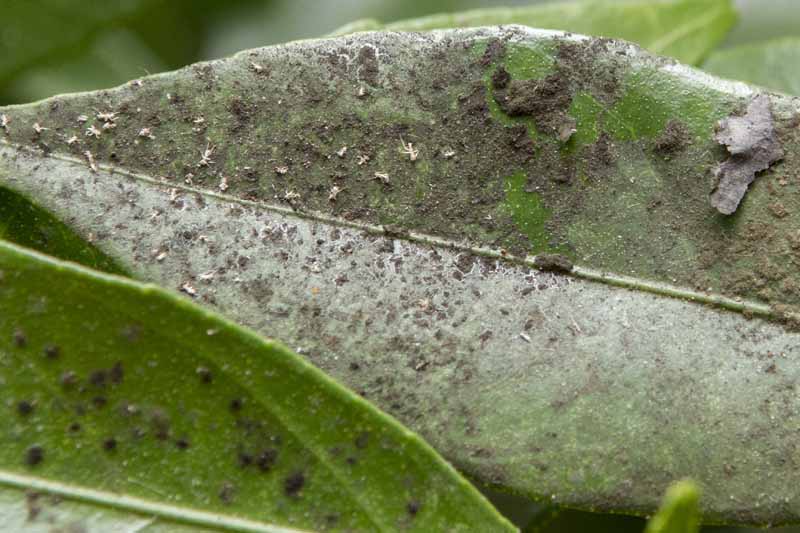 Sooty mold fungus travels along with plant-attacking insects such as aphids.

The fungi that cause sooty mold can be quite complex. Some will grow on the honeydew produced by several different kinds of insects, while other fungi are specific to particular plants or the secretions of certain insects.

The fungi produce spores that can spread between plants via splashing water or being blown through the air. In addition, small fragments of the mycelia can be dislodged from the plant and transmitted in the same manner.

Most of these fungal structures are sticky, and this helps them to adhere to the surface they are colonizing.

In a few cases, the condition does not develop as a result of an insect infestation, but in response to sugars produced and secreted by the plants themselves.

Plants like hibiscus and black walnut have specialized hairs on their leaves called trichomes that can release sugary exudates that can promote fungal growth.

It is important to note that sooty mold is not an infection, it is a superficial growth on the surface of the plant tissue. The fungi do not feed on the host plant.

This condition is mainly cosmetic, but it can still cause damage and injury to plants. 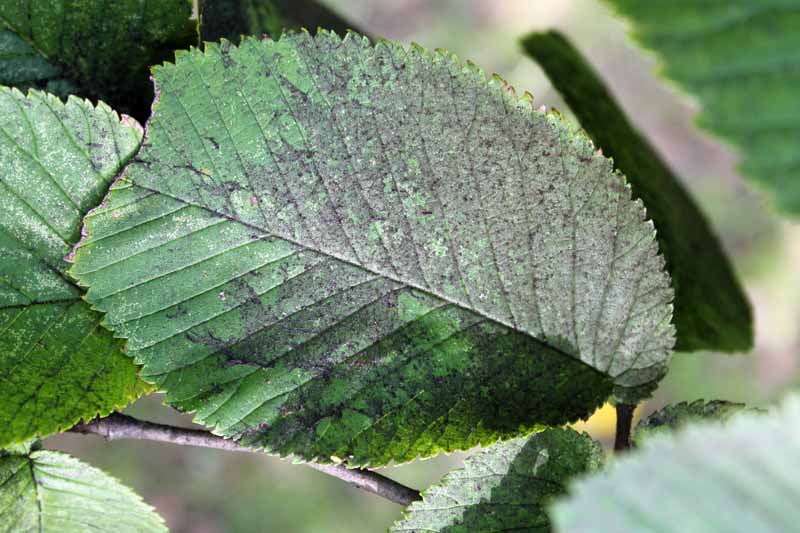 The fungi can cover most or all of the surface of leaves, blocking out sunlight.

In severe cases, the fungal growth can be so dark and so extensive that it can block sunlight from being absorbed by the leaves.

If this happens, the leaves will be unable to produce adequate amounts of chlorophyll, and this can limit their ability to photosynthesize.

As a result, the leaves may wilt, die, and eventually fall off the plants. In some cases, the whole plant can be killed.

Fruits and vegetables may also be affected, but these are usually still edible as long as you wash off the mold with warm water and mild soap before use.

Production of Honeydew by Insects

Insects that feed on plant sap usually ingest large amounts of it, much more than they can use. Unused sugars from the sap are excreted by the pests as a sweet substance known as honeydew.

In some cases, honeydew can drip off the leaves and coat whatever is below – other plants, fruit, cars, yard furniture, or sidewalks – and these surfaces may also be colonized by the fungi.

Insects that produce honeydew include:

In areas that are infested with spotted lanternflies (SLF), these insects can be present in such large numbers and suck so much sap that they produce enormous amounts of honeydew that can result in severe cases of sooty mold.

This condition is found in gardens throughout temperate and tropical regions, and is often seen in the summer months when insect populations have had a chance to become established. 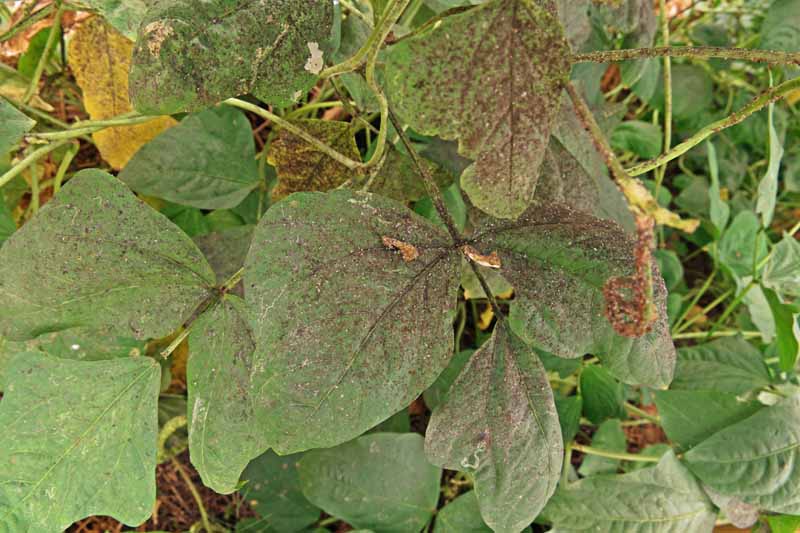 Fungal spores germinate in damp conditions in the presence of honeydew and rapidly colonize the surface they are on, forming dark mycelial mats.

Plants that are stressed by lack of moisture are more likely to suffer from aphid infestations, which results in the production of more honeydew.

Another factor is that during dry periods, the lack of rain prevents the honeydew from being diluted or washed off the plant, which can increase the incidence and severity of this condition.

Plants That Are at Risk

Many types of evergreen shrubs are prone to developing sooty mold.

Shrubs that are growing in shady conditions are particularly likely to sustain serious damage if honeydew drips from the trees above.

Trees like maples, linden, pines, or elms are also susceptible.

How to Control Sooty Mold

In home gardens, sooty mold is an unsightly cosmetic condition that usually won’t cause permanent damage to your plants – especially those that are well established.

If you control the insects that produce honeydew, you cut off the food source for the fungi and the sooty mold will typically disappear on its own.

Treatment with fungicides is not recommended. Fungicide applications may kill the fungi and reduce the spread, but will not remove the black coating from the plant or prevent a future outbreak.

Good gardening practices can help to prevent the pest infestation that can lead to an outbreak of sooty mold.

This can include growing a variety of different plants to create a favorable habitat for beneficial insects that predate on the pests and implementing integrated pest management practices. 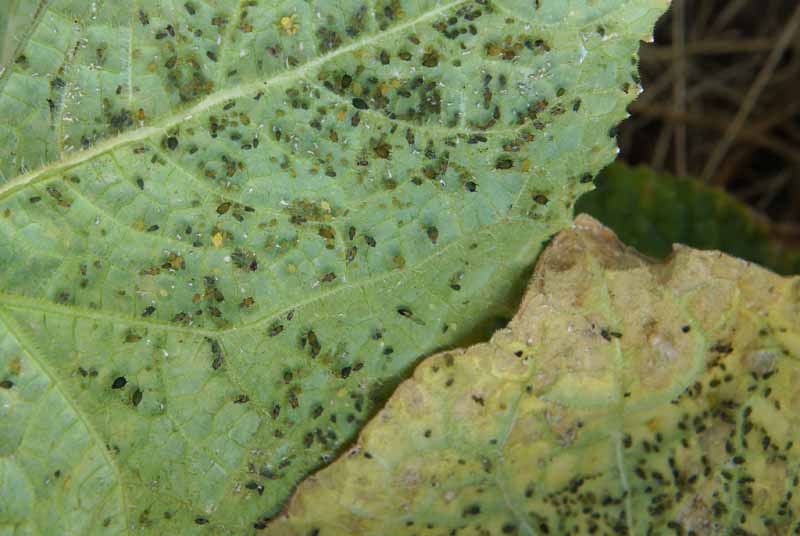 Control honeydew producing insects by spraying them off the plant with water or by using insecticidal soap, neem oil, or horticultural oils.

Healthy plants are less susceptible to insect infestations. Be sure to maintain airflow by correct spacing between plants, provide adequate irrigation, and keep the garden free from weeds and plant debris that may play host to pests.

You may not need to resort to the use of insecticides to control the infestation.

In the case of aphids, whiteflies, and softscale, something as simple as using a strong blast from a hose to dislodge the pests from a tree branch can do the trick.

You can also use an insecticidal soap, neem oil, or horticultural oils.

If the insects are limited to a small part of a shrub or tree, you might be able to get rid of them by carefully pruning out the infested area.

Keep in mind that SLF infestations are so difficult to control that this approach is generally not feasible.

2. Wash Sooty Mold Off the Plants

If the outbreak is not extensive, you can use soap and water to wash the black coating off your plants.

To do this, add one tablespoon of household liquid detergent to a gallon of water. Spray the mixture on the affected areas of your plants. After 15 minutes, use a strong stream of water to wash off the detergent solution.

You may have to do this several times over the course of several weeks, and it may not be feasible in hard to reach locations.

The combination of insects that secrete honeydew and fungi that feed on it leads to the unsightly problem of sooty mold.

These growths can range in severity from merely cosmetic to posing an actual threat to your plant’s existence. 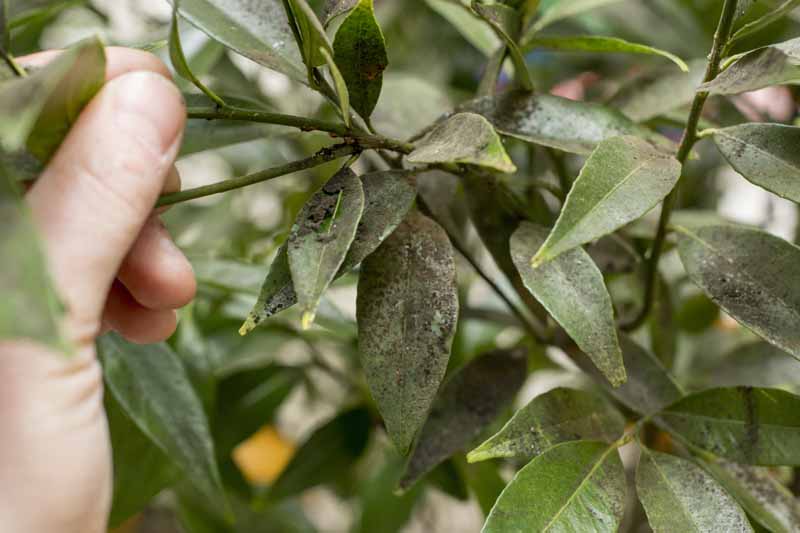 If that is not possible, such as in cases of heavy spotted lanternfly infestations, you can wash your plants with a combination of household detergent and water.

The most effective way to control sooty mold is to manage the insect infestation that caused it.

Have you had to manage a severe case of sooty mold? If so, let us know how it worked out and share your tips in the comments below.

And for more information on common plant diseases, be sure to check out these guides next:

© Ask the Experts, LLC. ALL RIGHTS RESERVED. See our TOS for more details.Uncredited photos: Shutterstock. With additional writing and editing by Clare Groom.

How one can Develop and Take care of Backyard Geraniums

How one can Begin Broccoli from Seed

Tomato Blossom Finish Rot – How To Forestall And Deal with

13 of the Greatest Types of Mustard Greens

How A lot Does Tree Elimination Value? Full Information

How one can Develop and Take care of Backyard...

How one can Develop and Take care of Backyard Geraniums

Why Are My Tree Branches Falling off?