Home Gardening How To Deal with Tomato White Mildew (Sclerotinia)

Referred to as timber rot, white mold, or sclerotinia stem rot, this disease can wreak havoc on tomato plants in cold, wet climates, and may persist in the soil for up to 10 years. 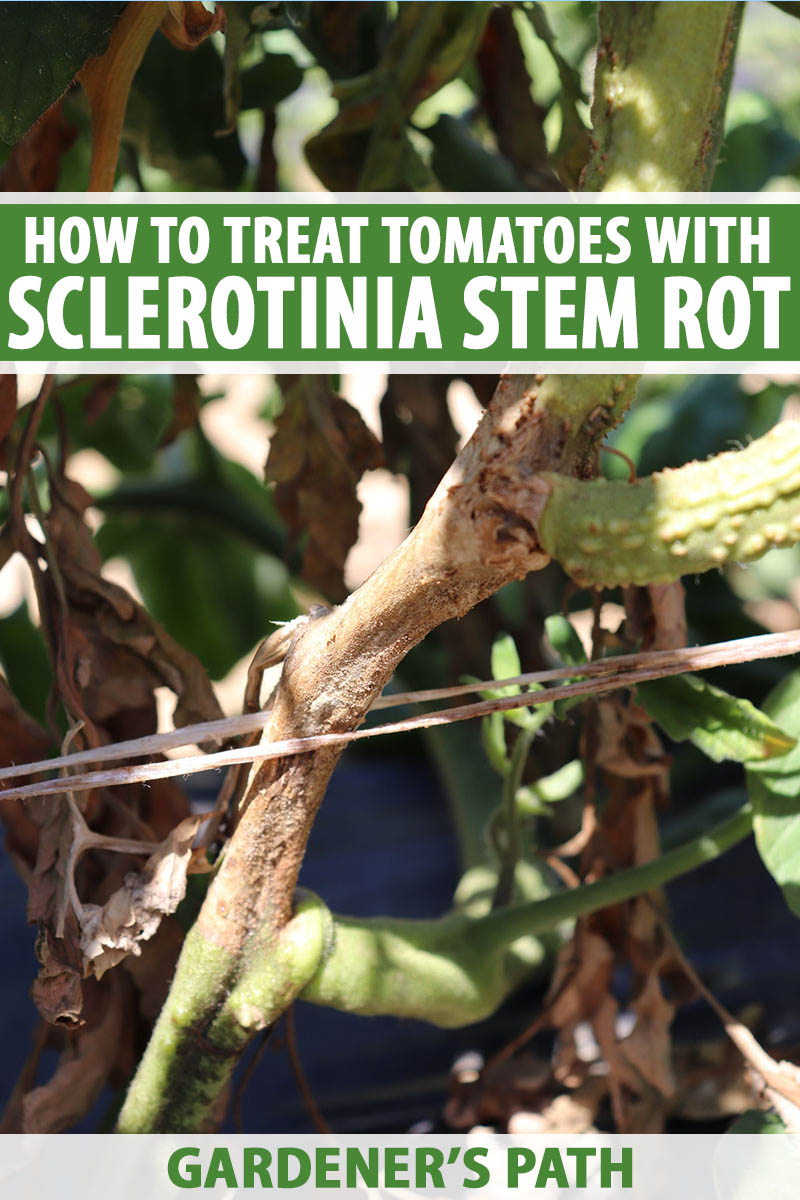 And it’s not only your tomatoes that may be at risk. White mold can infect more than 400 species of plants, including such important crops as potatoes and peppers.

Caused by a fungal pathogen Sclerotinia sclerotiorum, this disease is widespread in sub-tropical and temperate areas. Over 60 names have been used to date to refer to diseases caused by this pathogen.

Not surprisingly, it can also infect a large number of weeds, which can serve to maintain a reservoir of the pathogen.

Here’s what I will cover:

A classic symptom of this disease is the production of structures called sclerotia that give the organism its scientific name. These survival structures look like rat droppings – small, black, hard, cylindrical objects. 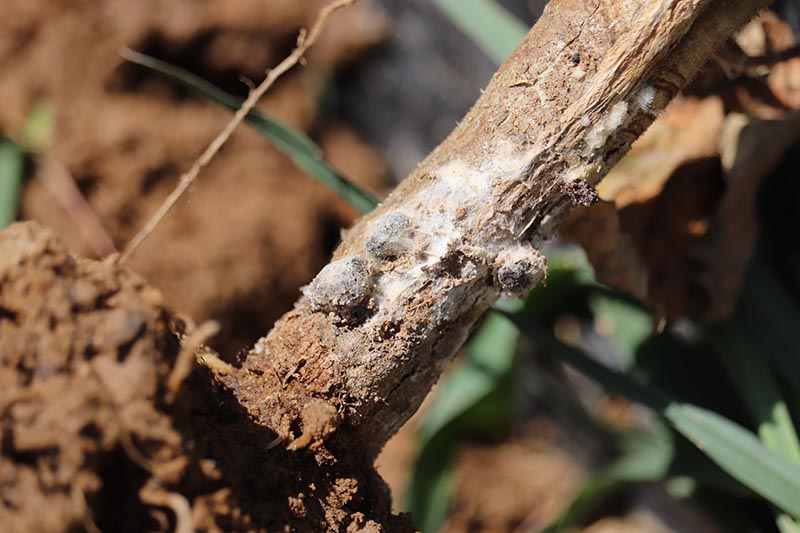 The sclerotia form in or on dead plant tissue. You can find them inside tomato tissue that has turned white and dry due to the disease. This symptom in tomatoes gives the disease its alternate name, timber rot.

The first sign of infection by this pathogen is at the base of the main stem at the soil line or on lower branches. At first, the disease manifests as watery soft rots and bleached areas on the leaf axils and stems.

Next, a white fuzzy mold grows both inside and outside the plant. It then spreads to the flowers, petioles, leaves, and stems. The fruit can also be infected, turn gray, and rot.

As the disease progresses, the plant will wilt. The tissues become even more bleached and brittle, and in seven to 10 days, the black sclerotia are formed. If you cut the sclerotia open, their insides are pinkish-white.

White mold is a disease of cool, wet weather – temperatures from 59 to 70°F. Nighttime temperatures around 60°F are particularly favorable for infection.

Spores are most likely to infect tomato plants after 16-72 hours of continuous damp with a relative humidity that is greater than 90 percent.

The plants are most susceptible when they are blooming, so pay particular attention to the flowers if the weather is cool and wet.

If the environment is warm and dry, the sclerotia can stay in the soil for years – as infective as ever. 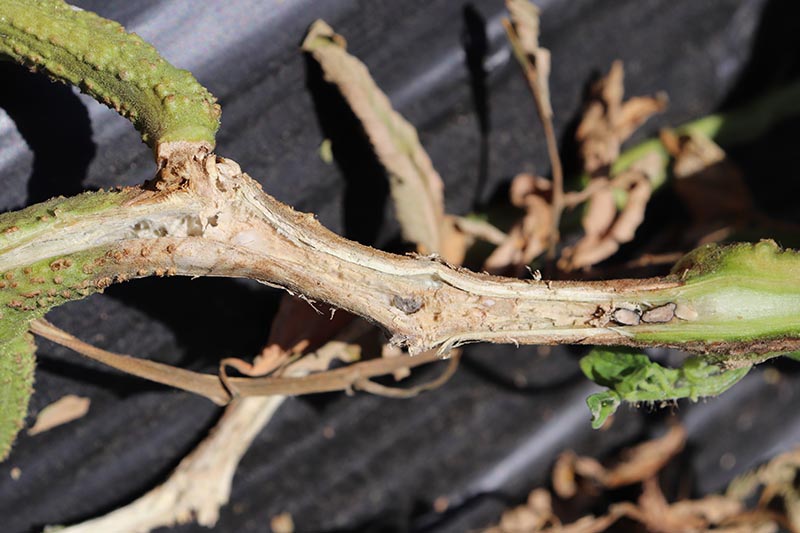 Once conditions are cool and favorable for the fungus, the sclerotia within the top inch or two of soil germinate and produce fruiting bodies. You may be able to see these – they look like little mushrooms on the surface of the soil.

The fruiting bodies produce spores right above the soil line that are very sticky. These can survive on a leaf for up to two weeks under favorable conditions.

The spores typically germinate on susceptible tissue such as dead flowers. This is often the case in leaf axils where a flower blossom has fallen and become stuck.

Once the pathogen has become established in decaying tissue, it moves on to attack the healthy parts of plants.

The only good thing about this disease is that once it has completed its disease cycle, it will not produce spores until the next year when favorable conditions return.

However, you are stuck with those sclerotia in the soil – a harbinger of doom for your tomato plants.

How Your Garden Can Become Infested with Timber Rot

The most common way that timber rot is spread is by spores that blow through the air from infected crops or weeds, and land on your unfortunate plants. 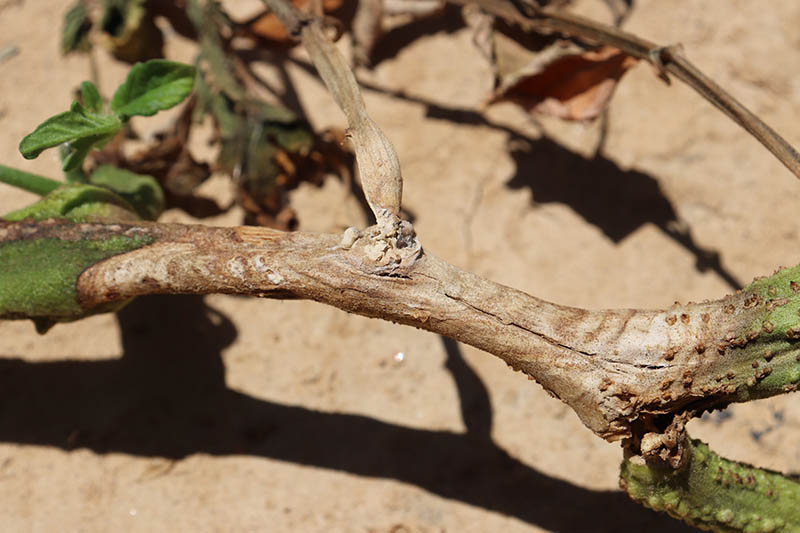 If successful, the fungus will then produce sclerotia, which can spread the disease further in your garden.

The wind can also blow soil or crop debris infested with sclerotia into your garden.

Water can spread spores or sclerotia, and irrigation water can be a common source of infection in commercial fields.

How to Manage Sclerotinia of Tomato

There are some techniques you can use to minimize infection of your plants. 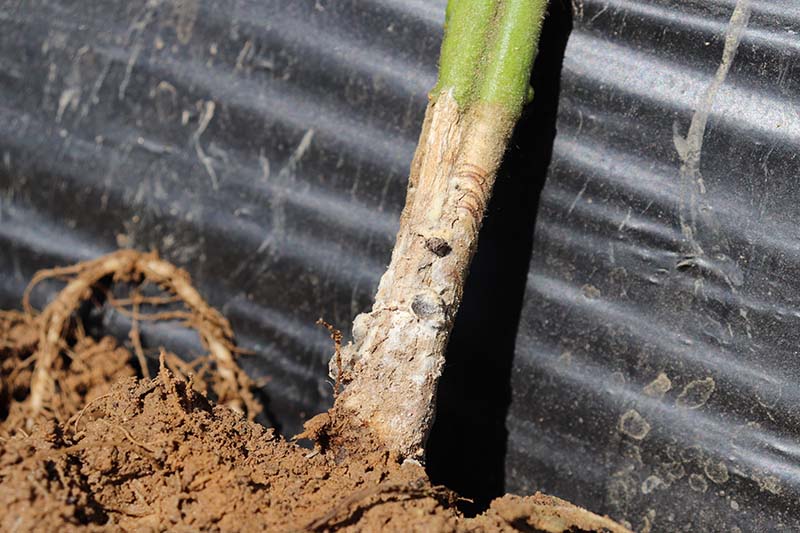 Unfortunately, no resistant varieties of tomatoes are available currently, though genetic testing of resistance to this pathogen is underway.

When conditions are favorable, it is a good idea to inspect your plants periodically and remove and destroy any that show symptoms of this disease.

Given the wide host range of this pathogen, it is particularly important to double down on removing any weeds found in or near your garden.

Rotate your crops and avoid planting in soil known to be contaminated with this pathogen for at least five years. Note that the sclerotia can survive deep in the soil for up to 10 years.

Make sure your gardening tools are clean!

Options include a solution of 10 percent bleach, 70 percent rubbing alcohol, or an activated oxygen product called BioSafe Disease Control that is available from Arbico Organics. 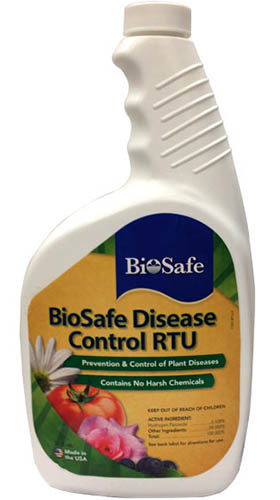 If you grow your tomato plants in containers, sterilize the pots before using them again. Plant in fresh soil to lessen the risk of possible infection.

If you can keep the surface of the soil dry, you have a good chance of preventing the sclerotia from germinating. Promote good drainage and prevent pooling of surface water around your plants.

Prune your plants to improve air circulation, and don’t plant your tomato plants too close together.

This combination of careful pruning and adequate spacing will reduce the amount of excess moisture that remains on the leaves, allowing it to evaporate more quickly.

Other techniques to minimize moisture include spacing your rows widely, and caging or training your plants to grow up trellises.

Finally, avoid watering your plants from overhead. It is best to use a soaker hose at the ground level, or drip irrigation to avoid spraying water on the foliage.

Commercial growers sometimes fumigate their soil. However, these chemicals are highly toxic to all forms of life – not to mention expensive – so they are something that you probably want to avoid as a home gardener.

Some studies have shown that soil solarization for eight weeks during the summer months can be effective.

Solarization involves laying a transparent sheet of plastic over the soil surface to use the heat from the sun to raise the temperature of the soil. The sheet needs to be pulled tight to minimize air pockets, and weighted down at the edges.

Dig Up the Soil Around the Stem

If you are short on space and you must consider planting your tomatoes in the same plot next year, strongly consider digging up the soil after removing an infected plant.

Dr. Beth Gugino, Professor of Vegetable Pathology at Penn State University recommends digging a circle around infected plants with a radius of six to eight inches and four to six inches deep in the ground and remove all of the soil.

Dispose of it in the garbage, rather than reusing the soil!

Other options include using biofungicides – treating the soil with microbes that will kill the S. sclerotiorum.

Your primary option is a certified organic product called Contans WG that contains a suspension of spores of a fungus, Coniothyrium minitans, that parasitizes the sclerotia.

This strategy works best as part of an integrated pest management system.

You will need to plan three to four months in advance to give the fungus plenty of time to attack the sclerotia.

It is also critical to avoid tilling the soil deeply, or you risk bringing sclerotia that had been buried deep in the soil to the surface, where they may pose a threat to your plants.

Endura (boscalid) is specifically labeled for gray mold, but is known to be effective against timber rot. You should apply it in advance if you suspect that an attack is likely.

The Combination of Spores and Sclerotia Is Deadly

White mold (or timber rot) of tomato has multiple ways of spreading to attack your plants. Air can blow in spores or soil infested with sclerotia, which can then make more spores. 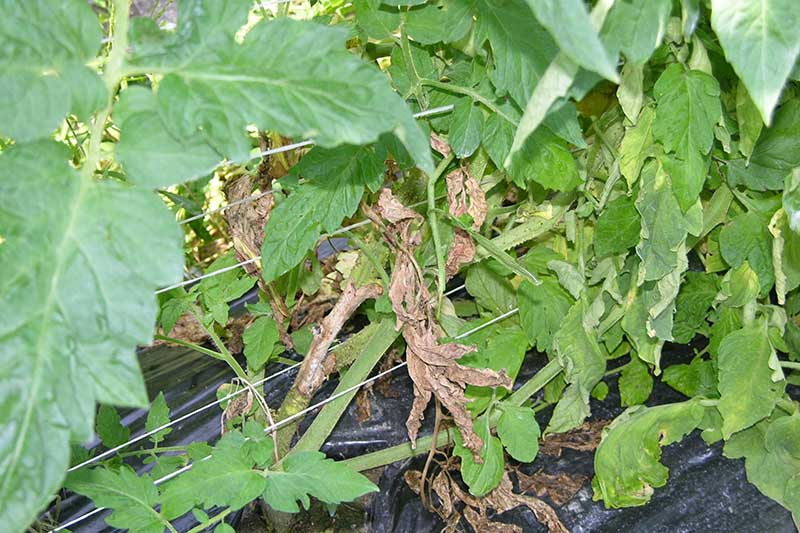 It is important to keep a close eye out for this disease and be familiar with the early symptoms.

There are a number of cultural methods you can implement to reduce the chances of infection.

If you know your soil is infested with sclerotia, you can treat it with a biofungicide to parasitize and kill them. And you can preemptively use synthetic fungicides to prevent infection.

Now, armed with this information, you are better equipped to keep this destructive pathogen out of your tomato garden.

Have your plants succumbed to timber rot? Or were you able to fight back against the white mold? Let us know in the comments, so we can learn from your experience.

And for more information on identifying and treating common tomato diseases you’ll need these guides next:

© Ask the Experts, LLC. ALL RIGHTS RESERVED. See our TOS for more details. Product photo via Arbico Organics. With additional writing and editing by Clare Groom and Allison Sidhu.

One of Helga George’s greatest childhood joys was reading about rare and greenhouse plants that would not grow in Delaware. Now that she lives near Santa Barbara, California, she is delighted that many of these grow right outside! Fascinated by the knowledge that plants make chemicals to defend themselves, Helga embarked on further academic study and obtained two degrees, studying plant diseases as a plant pathology major. She holds a BS in agriculture from Cornell University, and an MS from the University of Massachusetts Amherst. Helga then returned to Cornell to obtain a PhD, studying one of the model systems of plant defense. She transitioned to full-time writing in 2009.

Tips on how to Develop Onions – 10 Ideas for Rising Onions

7 of the Greatest Companion Vegetation to Develop with Chard

What Are The Most Widespread Garden Weeds?