‘Mortgage Lifter’ tomatoes were so popular in the 1930s and ’40s, people would drive 200 miles to buy plants.

At that time, you could only get them from the breeder, an amateur who preferred to be called “Radiator Charlie.” 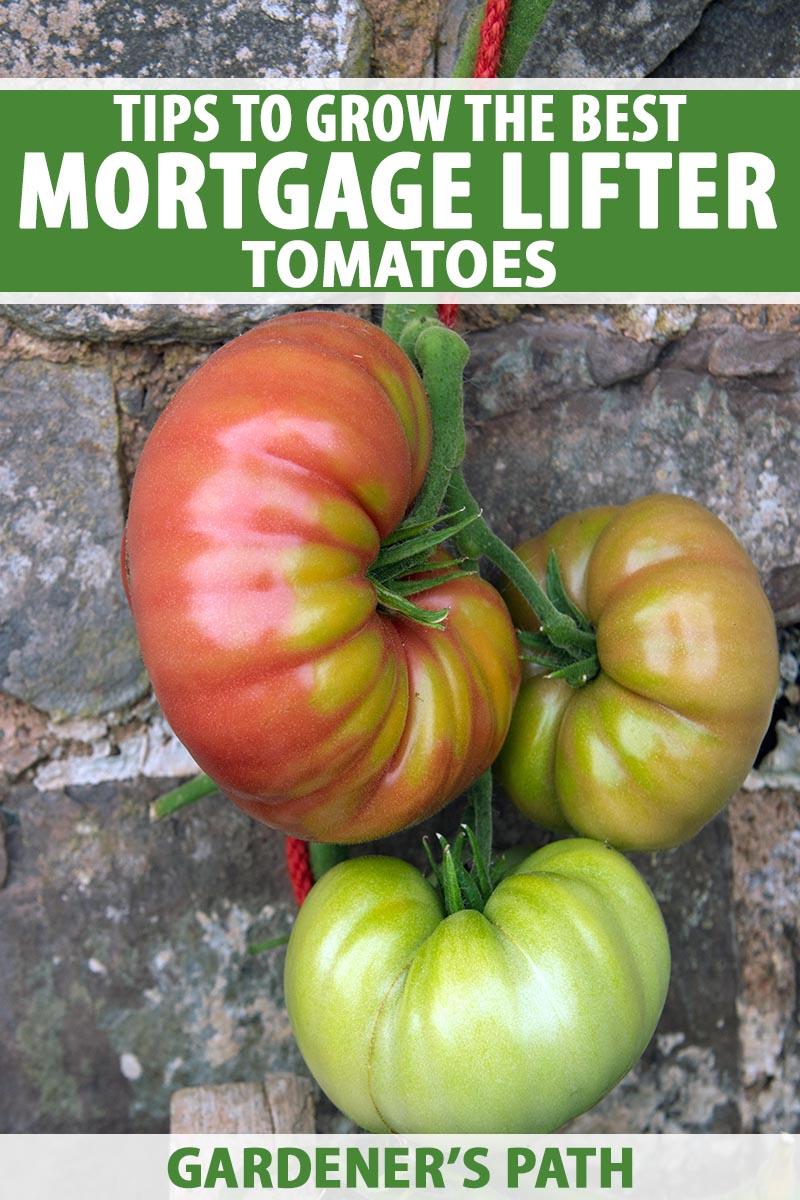 In recent years, as the interest in heirloom tomatoes has surged, this cultivar is popular once again, particularly with foodie home gardeners and farm-to-table chefs.

Happily for us, the Solanum lycopersicum seeds and seedlings are readily available online these days, and many local greenhouses and farm stores also stock transplants. 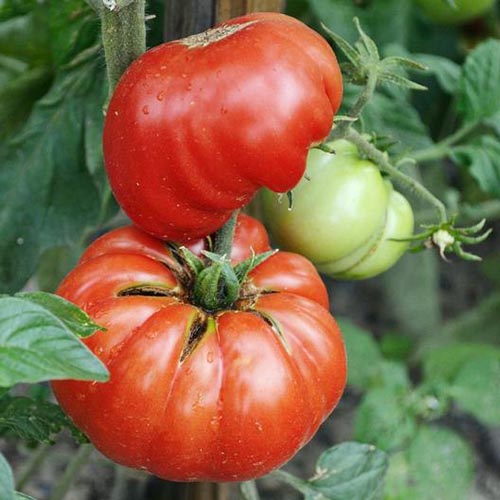 I’m one of the people who just started growing ‘Mortgage Lifter’ over the past few summers, and I do have a confession to make:

I originally started because I thought, surely, that name meant that these were the type of tomatoes you’d grow for profit, good to take to market, maybe as a source of added income.

At the time, I was thinking of trying to sell more produce to local food trucks. But I’m glad my misconception led me to these tasty pink, or pink and red, heirlooms.

I’ll tell you the real story on that name here soon, and I’ll also cover these need-to-know tips on growing this indeterminate heirloom cultivar:

How They Got Their Name

‘Mortgage Lifters’ may have once relieved financial stress, but only for their originator, a guy called M. C. Byles of Logan, West Virginia. 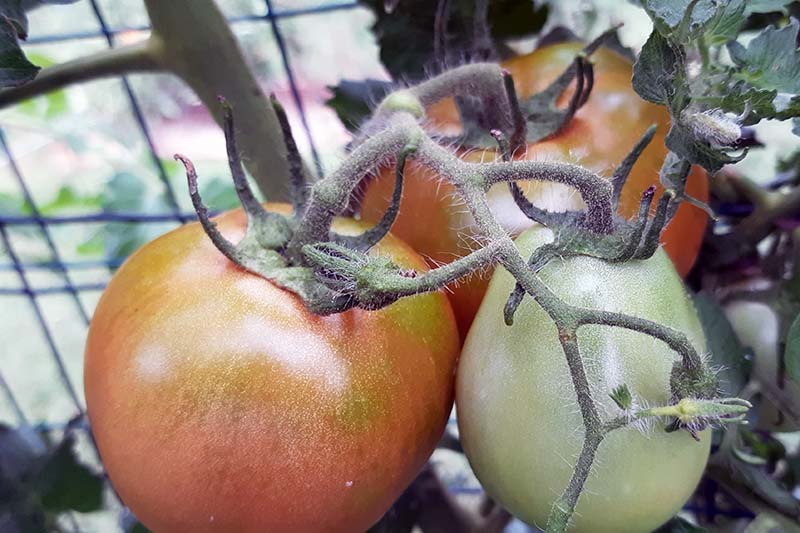 There are lots of internet versions of this lore floating around, but I’ve found some of them aren’t particularly accurate.

I take as my final authority the Southern Exposure Seed Exchange, which taped an interview with Byles in 1985, the same year he released his ‘Mortgage Lifter’ seeds to them.

There’s also a 2005 Living On Earth public radio segment that featured Byles’ grandson, Jeff McCormack, an heirloom seed maven in his own right. It confirmed and expanded this version of the tale.

Here’s how it happened:

Like so many of the best vegetable breeders, Byles was just a regular Joe who liked to grow a big garden.

His day job was running a radiator repair shop, hence the nickname.

In the 1930s, he started cross-breeding some of his favorite varieties to achieve a disease-resistant plant that produced very large, tasty fruit. This took six years!

He worked with four types, all of which produced big, tasty tomatoes. They included the heirloom pink ‘German Johnson,’ a beefsteak, and an Italian variety that I like to think was similar to my favorite Italian climber, ’Mrs. Maxwell.’

He used a baby’s ear syringe to cross-pollinate a careful selection of the healthiest seedlings by hand from six years’ worth of plants, until he had a cultivar that could reliably produce delicious, meaty fruits with few seeds.

And they were large! These beauties could run to a couple of pounds each when grown in optimal conditions, and some were as heavy as four pounds.

‘Mortgage Lifters’ had a distinctive look, and they still do. They’re flattened slightly at the top, with a pinkish-red color.

As for the name, once Radiator Charlie was finally happy with his strain and started selling seedlings in the ‘40s, he cashed in.

Oh, not by Bill Gates standards. But at the time, the plants that he sold for a dollar apiece were a reliable source of income, and helped him to quickly pay off his $6,000 mortgage.

A legend was born, and it continues today!

There are a few traits of heirloom cultivars that aren’t all that advantageous. They tend to have lower yields than hybrids, for example. And they require more days to harvest than other, more modern strains. 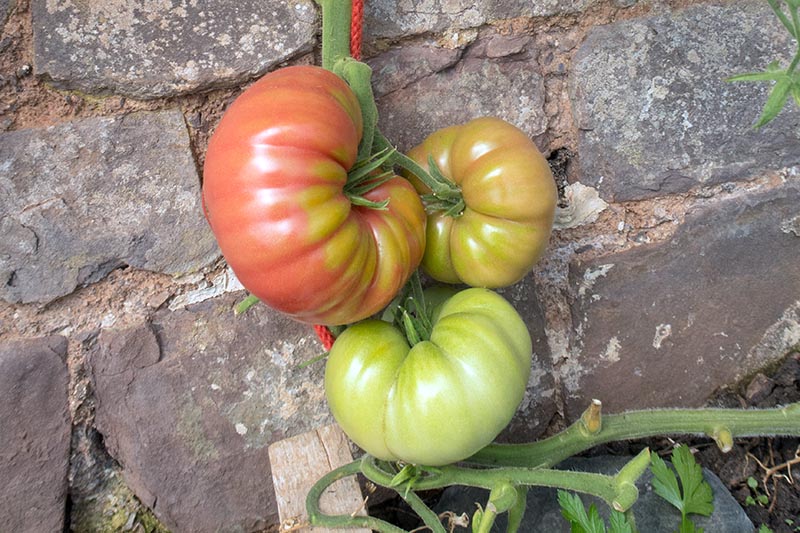 But then there are the advantages to growing a beloved variety of tomato, with seeds that have been passed down and around for generations.

The taste is always a sell with heirlooms like ‘Mortgage Lifter.’ Since they haven’t been bred to sustain long trips to market, they’re much more likely to have that “real tomato” flavor, and they tend to be juicier as well.

They’re also a beautiful color, though in this case, don’t look for a bright or deep red. These are pink or red-pink tomatoes, and the ripe flesh inside is almost a deep blush.

Beyond taste, the continual popularity that keeps them around decade after decade also tends to assure that heirlooms are adapted to growing in certain areas.

Particularly if you’re buying the plants or seeds from growers or gardeners in the same area where you plan to grow them, an heirloom might be just the thing.

In my hot Southern climate, for example, I was pleasantly surprised that the heirlooms persevered. Even in the hottest August weather when it was impossible to keep them well-watered, they still produced gorgeous, tasty fruit.

In this tomato’s case, you’ll also have the advantage of this particular heirloom being highly disease-resistant.

We have Radiator Charlie to thank for that. His six years of selecting the most productive, healthiest plants established a cultivar far stronger than many others, even some hybrids.

Who Should Grow Them?

These are great picks for the home garden, but it’s important to make sure you can accommodate their needs before you choose this popular garden variety. 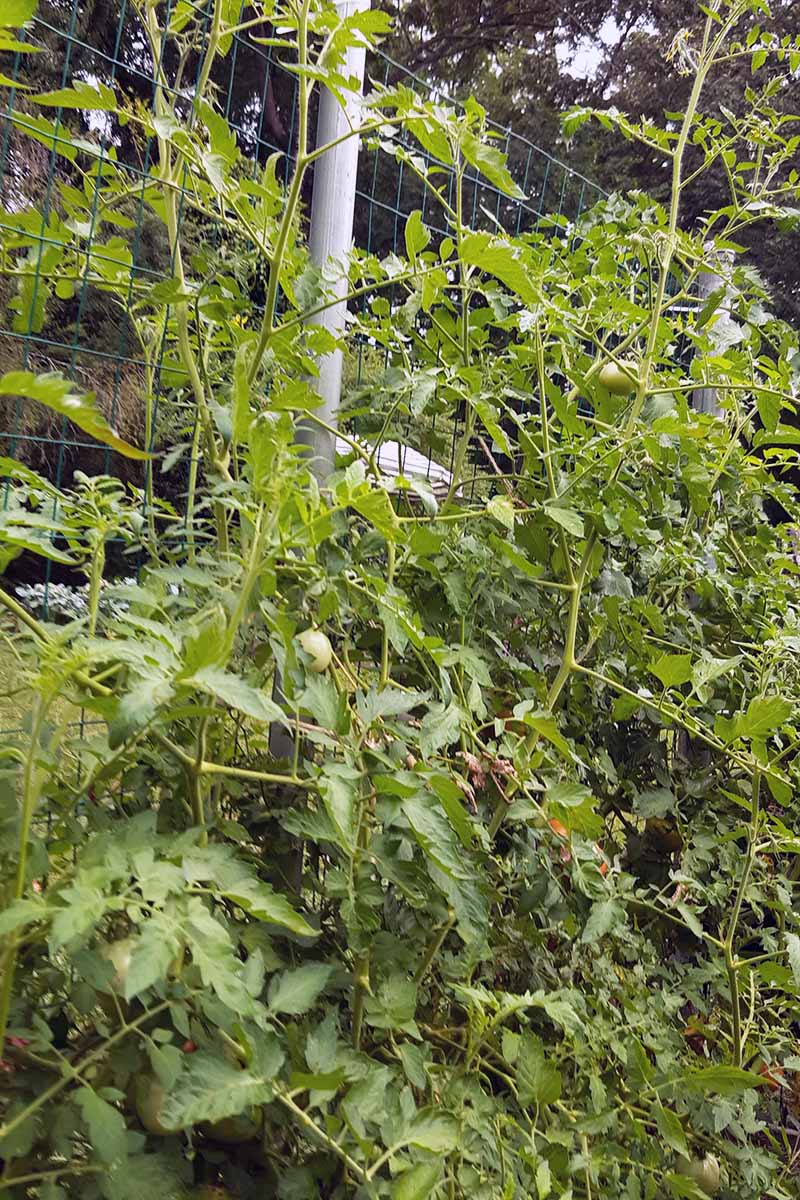 Like you would for any full-size tomato plant, you’ll need a spot in the garden with full sun and well-draining, nutritious soil with a pH between 6.0 and 6.8.

These plants will also need at least 18 inches between them to have ample air circulation that encourages growth and discourages the spread of disease.

Beyond that, ‘Mortgage Lifters’ are indeterminate, meaning they set fruit over the course of the season, not all at once. If you’re looking for tomatoes to can, that can be a liability.

Most people who are planning to use the harvest to preserve sauce or salsa for the winter choose a determinate variety instead, so they can plan on harvesting the season’s entire yield within a period of a couple of weeks. 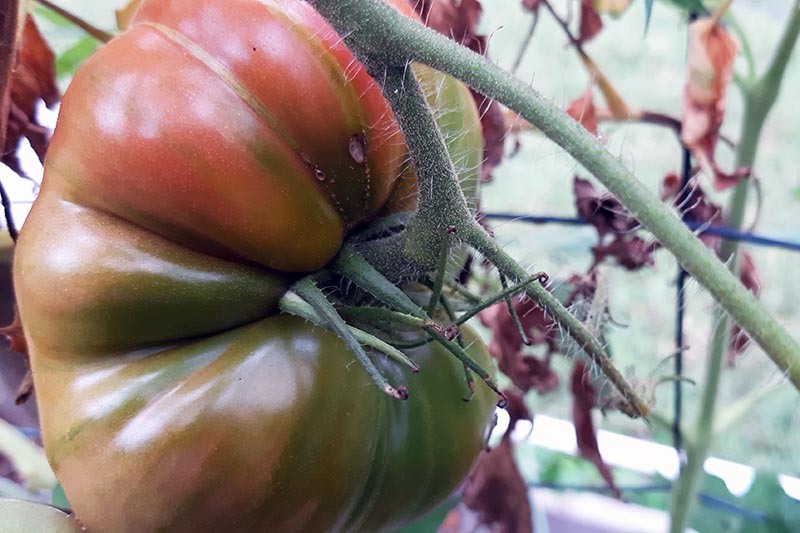 Also, since they take 79 days to fruit from transplant, you’ll need an ample growing season to succeed.

There’s one more consideration: These plants climb, like that long-ago Italian forebear that contributed to the strain.

They’ll need support up to about seven feet (or up and down at least three or four feet), and it needs to be sturdy to accommodate those heavy fruits.

I won’t rule out container gardening, but it takes extra effort for this heirloom. The minimum requirements include a deep pot with plenty of nutrition and room for a trellis or other support.

And you’ll be toting a lot of water to keep these thirsty plants happy and producing fruit in the hottest months within the confines of a pot or planter.

If you can meet the requirements though, I’d highly recommend this variety for anyone who’d love to have a source of juicy, firm, relatively seedless fruits throughout the summer.

For those who want to impress the whole neighborhood with sizable tomatoes that don’t sacrifice taste, these are an easy choice.

To learn more about growing all types of tomatoes, consult our handy guide.

For this one in particular, I have a few more tips:

Since it’s an indeterminate cultivar, ‘Mortgage Lifter’ has a fairly long harvest window, starting at around 79 days from transplant. 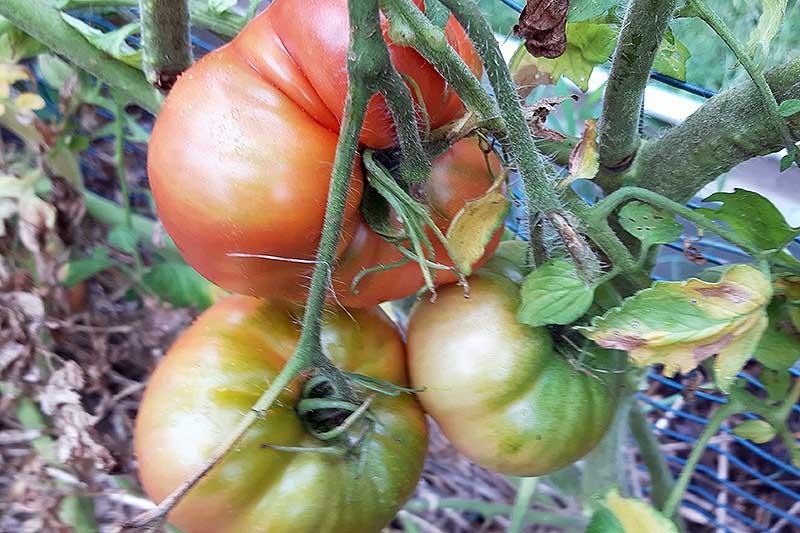 I like to extend that harvest even further by cooking with the green ones. Because they’re meaty, not too seedy, and quite sweet, they’re extra tasty oven-fried or as part of an old school hot pepper pickle.

The trick there is making sure the fruits are a glossy green before you pick them. When they’re at least that far along in their development, they’re ready to cook, or will also continue to ripen on the kitchen counter.

As for harvesting the ones that turn that lovely shade of pink-red on the vine, just make sure you don’t wash or refrigerate them if you won’t be using them right away.

That will take away all that luscious just-picked goodness, since washing too early encourages rot, and cold temperatures cause them to lose flavor. 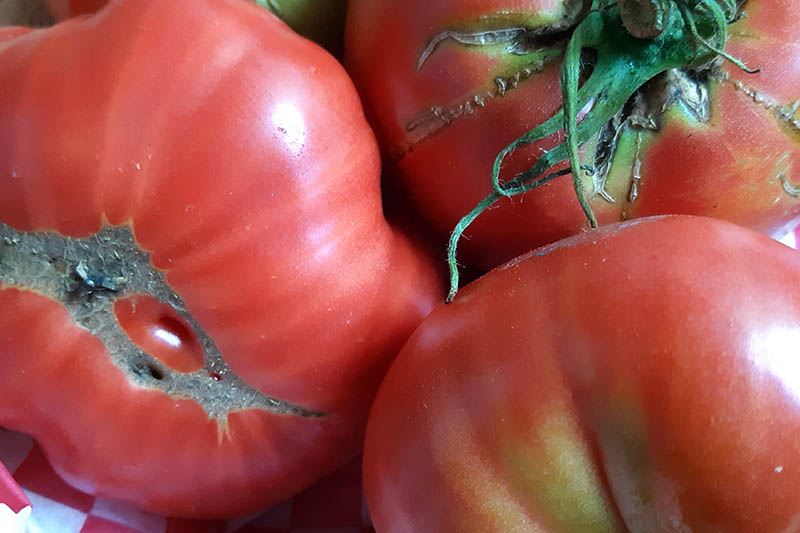 And don’t expect any heirloom to hold its juicy flavor and firm texture in a ripened state. After three or four days, these beauties start getting mushy.

Happily, though, if you too many come in at once, you can use up the surplus in gazpacho (remember, they’re known for having fewer seeds than most), fresh salsa, or pico de gallo.

I’ve had lots of luck with water bath canning them to make tomato jam or cooked salsa, too. Just remember that more watery slicing cultivars like these require more cooking than paste tomatoes to reach the proper consistency.

For more ideas for cooking an overabundance, check out our sister site, Foodal, for a collection of satisfying tomato recipes.

If you make it to the end of your growing season and you’ve still got a few lingering ‘Mortgage Lifters’ on the vine, that’s a lovely challenge.

I’d advise picking any that have at least started to ripen and are showing that glossy green. Then try one of the many techniques from our guide to getting tomatoes to turn red, and enjoy! 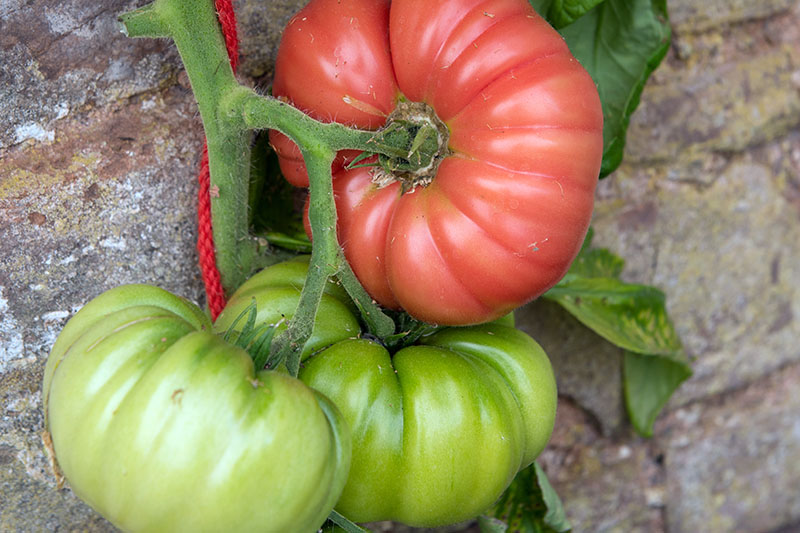 This wide open window for harvesting these heirlooms reminds me that I wasn’t too far off with my first ideas about their name. They may not pay off your real estate loan, but the tasty fruits will extend your food budget a bit.

Since they’re not hybrids, you can save the seeds (as long as you’ve managed to avoid cross-pollination) and start them indoors yourself next year, which is another win for the budget.

And that flavor! Fresh-from-the-vine tomatoes are a luxury you can’t put a price on.

Speaking of which, do you have a favorite heirloom? Please share your selections, growing tips, and mouth-watering photos in the comments section below.

If you enjoyed learning more about this famed plant from Radiator Charlie, read these other guides to growing the best tomatoes next:

An avid raised bed vegetable gardener and former “Dirt to Fork” columnist for an alt-weekly newspaper in Knoxville, Tennessee, Rose Kennedy is dedicated to sharing tips that increase yields and minimize work. But she’s also open to garden magic, like the red-veined sorrel that took up residence in several square yards of what used to be her back lawn. She champions all pollinators, even carpenter bees. Her other enthusiasms include newbie gardeners, open-pollinated sunflowers, 15-foot-tall Italian climbing tomatoes, and the arbor her husband repurposed from a bread vendor’s display arch. More importantly, Rose loves a garden’s ability to make a well-kept manicure virtually impossible and revive the spirits, especially in tough times.

Reuse & Recycle Your Cup of Jo: Tips on how to Use Leftover Espresso Grounds in Your Backyard

Find out how to Develop Avocado Seeds with Kids

Bayer Pays Out Over $10 Billion To Resolve Roundup™ Litigation

Mosquito Species: How Many Are There?