Home Gardening Why Do Tomatoes Break up On The Vine?

You’ve raised your tomato plants right: provided them with good-quality potting mix, fertilized them with care, faithfully pinched off sucker shoots or trimmed back low-hanging branches. So why do tomatoes split, even when we’ve spent so much time and effort on making sure everything goes perfectly?

Tomato cracking and splitting can appear in two forms. In one, concentric rings of cracks can appear around the top of the fruit. In the other, lengthwise splits happen down the sides of the fruit, either along the indents in heirlooms or along the surface of smooth varieties.

So is there a way to stop your tomatoes splitting before ripe? Let’s explore this in detail and go over what causes it, how to stop it from happening, and whether your split tomatoes are safe to eat.

What Causes Tomatoes To Split?

In a nutshell, tomatoes split open when the fruit inside is growing faster than the tomato’s skin. What’s usually the cause of that is a sudden influx in the amount of water the tomatoes are receiving. Perhaps you were watering inconsistently, or a sudden heavy rain produced a deluge. Whatever the reason, it’s most common when there’s been a long dry spell followed by a lot of water.

This problem is most common in tomatoes that are nearly-ripe. As tomatoes get close to ripeness, their skin doesn’t grow as quickly. But the plant will try to cram more water into the fruit nonetheless, and that will result in skin split open to expose the fruit. This type of cracking is referred to as radial cracking.

With heirloom tomatoes, you have another reason to ask “why do my tomatoes split”. You see, there’s a price to pay for all of that flavor. Many heirloom varieties, especially the big beefsteak types, will crack in concentric circles around the top of the fruit as they grow and mature on the vine. In most cases, these are fine cracks or lines on tomatoes rather than the deep tomato cracks down the sides. Think of them as “tomato stretch marks”, as the plant’s trying to make the fruit nice and juicy for you. Some heirloom tomatoes crack along the sides too.

How To Stop Cracking In Tomatoes 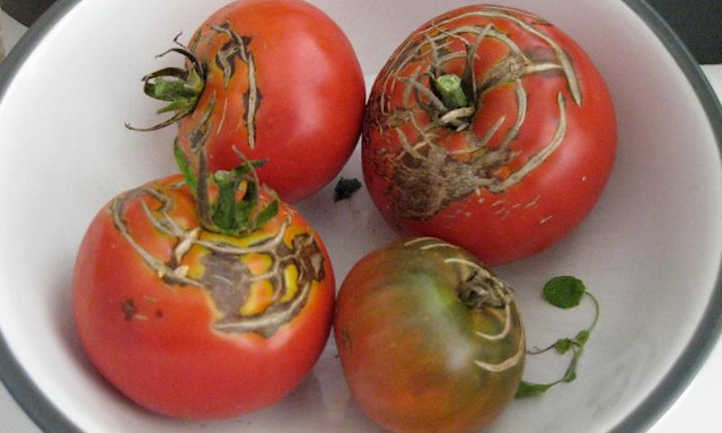 Here, consistent moisture is the key. But that’s not always as easy to provide as you might think. It really depends on how what level of watering your tomatoes are accustomed to.

People who grow their tomato plants in well draining soil are likely to have fewer issues with split tomatoes or tomato cracks. Since these soils tend to drain off excess, an occasional downpour won’t be a problem, as the water will flow easily away.

As most raised bed mixes have excellent drainage, many people experience less tomato splitting in a raised bed. But if you don’t have raised beds, preparing your garden bed in advance is essential. Make sure it’s not hard-packed clay, as that can prevent good drainage. Work the soil at least a foot down or more and incorporate lots of compost and other organic material to loosen it up. A small amount of perlite can provide aeration and improve drainage.

Most of preventing cracking and splitting happens back when you’re preparing to plant your tomato plants for the year. This sets the plants up for success from the beginning.

Don’t just loosen up and amend the planting hole. Doing that will create an in-ground container that can fill up with water. Instead, work the whole bed so that excess moisture can spread out over a larger surface and be absorbed. This also will make it easier for you to work fertilizer in at the soil’s surface later.

When planting your tomatoes, add some calcium to the soil underneath them. You can use powdered eggshell or agricultural lime. That small dose should be enough to cover the entire lifespan of that plant, so you won’t need to apply any more calcium after that. If you’re using a fertilizer optimized for tomatoes, those usually include calcium, so adding some of that to the planting hole and then fertilizing as normal during the season is also fine.

After planting, provide a mulch of wood chips around the bottom of your tomato plants. Aim for roughly 2-3” of mulch, and make sure you keep it topped up throughout the season. If you have a soaker hose watering system, you can put this mulch right on top of the soaker hoses. This layer of mulch will keep the soil moisture in the soil where it belongs.

There are a number of crack resistant tomatoes available for purchase, both as seed or in live plant form. Read the information about the tomato plant before purchasing. Even then, varieties that aren’t crack-resistant are still fine to plant as long as you watch closely. If tomatoes are splitting, pick them immediately.

Finally, water consistently and evenly. You don’t want to give your tomatoes feast or famine conditions, because letting the soil dry out totally between waterings can lead to other problems like blossom end rot. Overwatering can lead to a number of fungal soil diseases. You want your tomato plants to be happy and healthy! So maintain even moisture levels in your soil.

Can You Eat Split Tomatoes?

If you catch them quickly enough, absolutely. If you’re watching your growing tomatoes closely, you’ll be able to see ones that have started to produce radial cracks. Harvest those immediately, even if they’re not quite ripe. Tomatoes will continue to ripen off the vine.

If the tomato is oozing or has a sour smell, add that one to your compost. Those are no longer viable. Rotten tomatoes split, too, so if it feels soft and mushy, that’s a sure sign it’s compost-worthy. If it’s off-color for its variety, that’s another sign that maybe it’s not okay.

But if the skin looks recently split, and it still smells sweet, it should be fine to eat. Cut off the portion that cracked just to be on the safe side and compost that portion. The rest of the fruit should be okay.

With those heirlooms that produce the concentric circles around the top, just take a little extra off the top. You’ll still have plenty of tomato to enjoy. If the tomatoes crack or split radially, again just slice in around the crack and take out that damaged portion. The fruit should be fine.

The Green Thumbs Behind This Article:

What’s The Greatest Gasoline Leaf Blower For The Cash: The Definitive Information